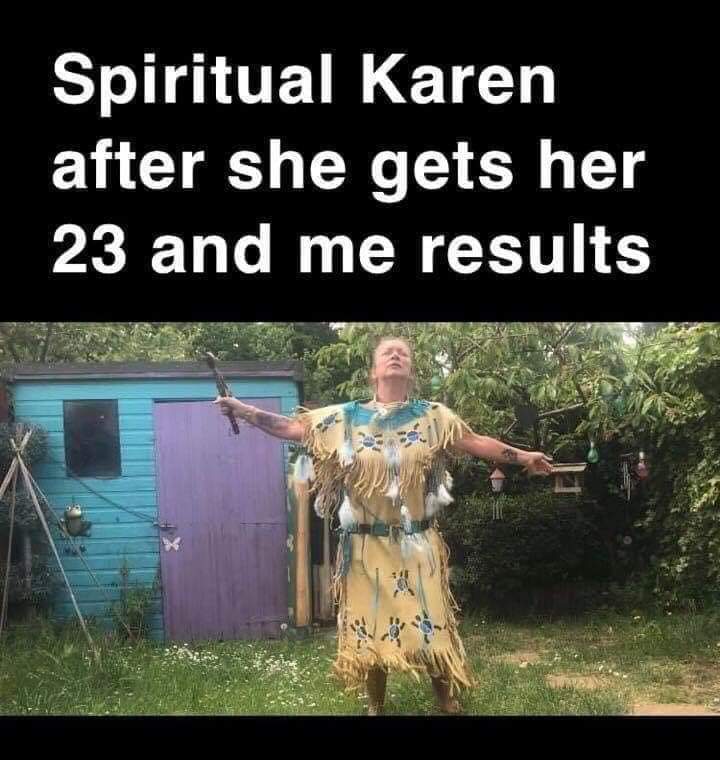 Recently a meme has sprung up in the lexicon of Natives (Indigenous to North America). It is the “Spiritual Karen” meme, featuring a white woman named Michelle who recently posted to an online group on Facebook that promotes safe social distancing, powwow culture, dances, artisans, musicians and the appropriation of Native traditions during the 2020 pandemic of Covid 19.

Michelle posted herself in what appears to be a Native inspired dress. She prefaced her post by saying that normally she doesn’t film such sacred things, but hey, she felt it was spiritually needed right now. She is featured with a pipe and for those not in the know, pipes for many tribes in the US are sacred items.

They are sacred items that have a specific purpose and specific traditions on how to handle, care for and use them during prayer. This non-native woman is seen in said photos putting her pipe on the ground. This is simply never done in authentic native ceremony, but she is clearly doing it. In response to native critics Michelle defended her actions by saying that it wasn’t on the ground, but on a crystal. Michelle’s actions are not viewed with the light that she would hope by Native people. Native people have experienced a long history of appropriation be it appropriation of land, resources, burial properties, bodies and children that were removed all in the effort to assimilate and eradicate Native peoples of America.

Appropriation of culture has been prevalent starting since Native people won the right to pray in their own way when the Native American Religious Freedom Act was federally enacted by a joint resolution of the Congress in 1978. That’s right: before 1978 Native people did not have the right to pray in their own way. Native people could go to prison for doing the same things Spiritual Karen is doing (incorrectly) today. Since the 1970’s there have been no shortage of non-natives who have embraced Native traditions and culture, including spiritual ways with an appropriative mindset. Learn more on NativeAppropriations

Spiritual Karen got a native woman banned from FB for posting memes like this one. https://www.change.org/p/native-communities-and-allies-stop-cultural-appropriation/psf/promote_or_share

The very way that people think of us is engrained in false imagery created by those who do not understand us or know the vast diversity that makes indigenous people so awesome. Why are we upset with Ms. Spiritual Karen? Michelle Martin, or as she calls herself “White Buffalo Calf Woman” and “Sacred Breath Prayer Woman,” promotes herself as a “Shaman.” Native people do not use this word. This word has no origin with native culture or spiritual practices of North America. The word has origins in another culture and continent.

Why are we upset with Ms. Spiritual Karen?

If you look at Michelle’s Facebook profile, you will see she is not from the US. She currently lives in the UK. Again, there is a long history of people who have appropriated native spiritual practices who are not grounded in our culture or our land. Many also seek to financially gain from it. In some cases this kind of irresponsible business and spiritual practice has lead to grave harm, like in the case of the spiritual leader James Arthur Ray; three people died on his watch because of his greed.

The other sad and unfortunate outcome of spiritual appropriation is that people start to begin following traditional ways without proper support and guidance and then also start to utilize medicines and herbs in a way that either causes suffering to others or to the environment and the plants themselves through the over-harvesting and commodification of medicines. Native traditional ways done right will factor in ways to make sure we are not taking more than we need and do not over-harvest.

In indigenous communities, cultural appropriation has bad effects upon the emotional wellbeing of our people. When we have seen mainstream stereotypes of what it is to be native we want to either dissociate from the image and become ashamed of who we really are despite the fact that these images are false, or we become the savage brave, the alcoholic, the sexy maiden, the crazy “Indian.”

We are spoken of in this country in past tense, like we don’t exist. This image of us shapes how others see us as well but also how we see ourselves. We become ashamed to be a caricature. We have a problem within our Nations with alcoholism, suicide, violence and death. If you have ever been around or lived in a tribal community you will see disparate differences. The people who live around us approach us with racism and violence.

We are either vilified by outsiders or held up to an unattainable expectation of being peaceful, graceful and stoic natives, a canvas for non-natives desires’ and fantasies. Because of these different reactions and expectations, when we speak out about injustices that our communities face we are faced with scorn by those either judging us from one end or another of this spectrum. When we tell others to kindly respect indigenous protocol or to abide by tradition we are told that we are being exclusionary.

Spiritual Karens like Michelle Martin claim that Native people are being exclusionary by bringing this issue to her attention. She is upset at all of the kickback that she has received but will not engage with those who have reached out to her to have real conversations about what she is doing. This, in my opinion, is a lack of accountability for her actions. Why is it that she is owed the ability to call herself a “shaman” and to tout or mimic our spiritual ways but cannot answer up when asked hard questions?

You are not a shaman or medicine man or woman simply because of a feeling you have.

Respect for cultures means not commodifying them or profiting off of them. It means thinking about what elements of consideration need to be taken when engaging with culture sharing.

Culture-sharing is a long process and you are not entitled to ‘level up’ and pursue your own interests and goals at the cost of indigenous peoples.

You cannot have all of the glory without doing all of the work. People who have taken on spiritual roles within native society do so humbly and with an open mind. If someone is doing it for ego or gain it can have grave repercussions for them, for anyone who works with them and for the indigenous communities they are taking from without accountability.

You are not a shaman or medicine man or woman simply because of a feeling you have. There is so much more to it and the need for authentic healing is great. When we as a Native people see someone take our medicine without earning it or being accountable for it, we do not take kindly to it. So, that, in part, is why you see the rise of the Spiritual Karen within our circle and community in the form of a meme.

Native people are joining forces. We share information with one another. If someone acts in a way that can hurt others, we speak out about it. Typically we reach out and try to have effective conversation about it and some people are interested in learning how to be in right relationship to indigenous people and indigenous protocol, but most people who respond are Spiritual Karens who are more likely to attack and block indigenous people than have a real conversation.

We have not seen the last of Ms. Spiritual Karen. I am sure she will continue her quest for authenticity, no matter how many indigenous people or ecologies she harms with her untrained and unaccountable behavior along the way. #TheCaucasity. Personally, I hope that she finds clarity within herself to get out of the “I” and more into the “we” and to truly see indigenous people for who and how we really are.

Surviving cultural theft is not something new for indigenous people and we are not daunted by the Spiritual Karens waving around burning wands of white sage but we do call on all people to become accountable to our medicine and to us: indigenous people have been here for millennia and we shouldn’t have to fight to have our voices heard or our personhood respected.

We are the keepers of this nation’s lands and settlers are comparatively recent arrivals. We do not owe outsiders our practices or traditions, which have already been brutally curtailed by colonial history in so many ways. We know how to tend this land and we are the stewards of the future. We are the bold and living leaders of the future, not dead objects from the past to commodify and fetishize.

If you are non-native and have been confronted by an indigenous person about some aspect of your behavior, be grateful they have given you their time to help further your education and then do your own work to follow up and learn more, to be a good neighbor to indigenous people and begin to be in right relationship with us. Let’s work together to envision new ways of culture-sharing that respect indigenous peoples.